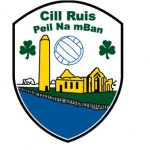 Ladies football club in the capital of West Clare!

Kilrush Ladies football club was founded in 2007. From them until now the club have fielded teams in all age groups from U6 to adult level and the club have gone from strength to strength.

Success at underage level has been that key to the clubs survival and participation in county teams at all ages.

The adult team won the Junior A championship in 2018 and went on to make the Munster final in the same year.

Huge thanks go to those who give their time and energy to coach and organise the club.

It’s a team effort both on and off the field.